Let’s say you have the following data in a table:

Now, what if we wanted to update the position value of each row to match the order if we were to sort by name…

To figure this out, the first thing I did was write the SELECT query I needed to target only the fields I wanted to update. There is lots of other data in the table (it’s a table of tasks, milestones, and discussions) and I just wanted to change the position value of some specific subset of this data (tasks that are not completed).

Now I needed to know the position of each row in the result, so I worked out this query (thanks to Xgc in #mysql for pointing me to @variable). Test UPDATE queries on a cloned/test table!

That resulted in a dataset that looked like this:

The last step was to come up with the UPDATE query necessary to change the position value based on the rank.

After I worked all of this out I got another message from Xgc, who provided me with an alternate (and probably safer) solution, shown here: 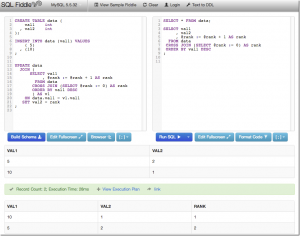