Last spring I purchased a lawn sweeper. It was very useful after I dethatched my lawn, but it proved less effective against the barrage of leaves this fall. I decided I’d try my hand at crafting a lawn mower bagger. The first design worked pretty well, though it took some tuning. Unfortunately, it only lasted about 5 minutes as the entire discharge chute ripped off on a high-spot in the lawn. 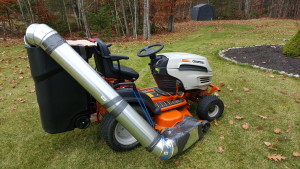 After attempting to fix it I found myself getting too frustrated, so I ripped the whole thing apart. A few days later I decided there had to be a simpler way to pick these leaves up. I looked around my garage to see what supplies I had on hand. About 45 minutes later I came up with this: 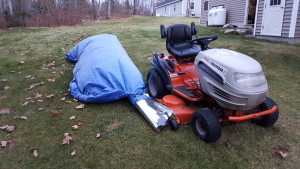 Let me tell you, it performed so well I couldn’t stop laughing. I’m sure my neighbors were laughing too.

The only parts needed are:

It needs some refinement, but without exaggerating, my lawn was spotless when I finished. The improvements I’ll be making are as follows:

I took another shot at this with a smaller tarp. The clamps didn’t work as well as I’d hoped, so I ended up using duct tape. It worked really well and, because this tarp is dedicated to this purpose, I can leave almost all of the tape in place.